The school is located at the end of Freyberg Street, Palmerston North and is bordered by Skoglund Park on the east and Ross Intermediate School on the west. To the north are the netball courts of Vautier Park. Also present is the Freyberg Community Pool, which is open to the public for leisure.

The school was founded in 1955 and named for World War II hero and former Governor General, Bernard Freyberg. His name is reflected not only in the name of the school, but also of the school’s gymnasium, Lord Freyberg Memorial Gymnasium. Like most New Zealand state secondary schools built in the mid-1950s, Freyberg High School is of “Henderson-type” construction, with long single-storey classrooms blocks of timber construction interconnected by a central spine. Additional classroom facilities have been built over the years to aid in the growing student numbers.

Also, the school’s mascot and yearbook, which is handed to students at the end of each year, is known as the Salamander which was Freyberg’s nom de guerre during World War 2. The name given to him by Māori, Te Pou Hōia, is also reflected in the Māori name for the school. 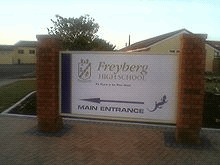 or use the absence feature on the Freyberg App